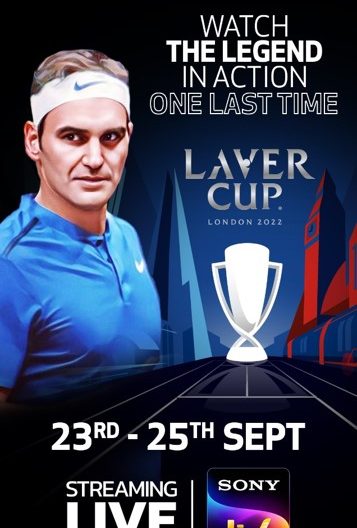 The 20-time Grand Slam champion confirmed that the Laver Cup in London, starting September 23, will be his last tournament on the tour, and his final goodbye to professional tennis. The decision has drawn all eyes on the championship, and Indian fans can stream it exclusively on SonyLIV.

Seeing Federer return to the court of which he has been a well-deserving king for over 2 decades after his last appearance in Wimbledon 2021, is going to be bittersweet. With his retirement, Laver Cup 2022 will sadly become the last time that the world will witness the four superstars of the tennis world- Roger Federer, Rafael Nadal, Novak Djokovic, and Andy Murray come together in action on one platform.

With an illustrious 24-year long career to his credit that boasts of a record-tying five U.S. Open titles, a record eight men’s singles Wimbledon titles, 20 Grand Slam championship titles, and a whopping 103 ATP singles titles amongst many others, pit is safe to say that Federer has cemented his position as arguably one of the champions of the sport. The court will miss him, but his legacy will live on for years to come.